Story: The Tramp spends time at a golf resort, then falls in with a rich crowd, a neglected wife, and a rich man who looks just like him…

Production: At the beginning of 1921, Charlie Chaplin still owed First National a trio of films as per his contract, while his partners in United Artists (which had been underway for a couple of years by then) were impatient for a Chaplin film to add to their own productions. Chaplin’s increasingly detailed, and therefore slower, working methods meant there was no quick way out of this situation. He could have—as he had previously threatened—knocked out some careless short quickies simply to fulfil the contract. The problem with that idea is that they would still have the Chaplin name on them, and he was developing into such a perfectionist and ‘control freak’ that he couldn’t think of releasing anything of less than stellar quality. The only thing to do was to keep making films at his own measured pace until the First National contract had been fulfilled.

Whether it was due to him finding a new peace of mind after The Kid, or simply that he knuckled down and got to work, Chaplin produced his next film, a three reel short called The Idle Class, in less than five months and with relatively little difficulty. He feel back on some ideas from his earlier Essanay and Mutual shorts—namely the ‘bogus Count’ concept—and mixed them with the higher production values First National’s money and his own lavish production studio now allowed him.

Chaplin took on a dual role of the wealthy drunkard trapped in an unhappy marriage with his wife (played by Edna Purviance), and his regular role of the little Tramp. This, of course, was designed to allow for all sorts of mistaken identity hi-jinks, as Edna’s ‘neglected wife’, her father (Mack Swain), and their friends all mistake the Tramp for her delinquent husband. This part of the film was preceded by some comedy business on a golf course, as the Tramp goes about collecting golf balls that don’t belong to him, provoking an altercation between two other players (Mack Swain and John Rand). Biographer John McCabe claimed the entire sequence had been inspired by a trip Chaplin took to his studio’s prop store in search of inspiration, only to come across a set of golf clubs and realize he’d never used them before in a film. 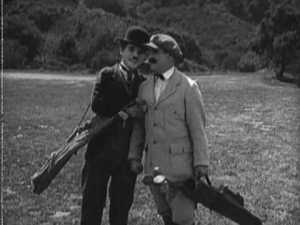 There’s no getting around the fact that The Idle Class is largely a throwback, an old fashioned style of comedy for Chaplin at this point in his career, something he was striving to move beyond. Perhaps he felt he didn’t want to gift First National with his best efforts, especially as they had rebuffed his latest attempt to escape from his contract, retaining any more ambitious ideas for after he’d completed his obligation and could offer his new work through United Artists, so appeasing Douglas Fairbanks and Mary Pickford, the only filmmakers who at that point had released new work through the new distribution entity. 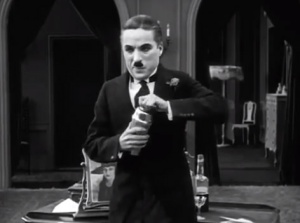 The dual roles were also something of a hackneyed idea, but it did lead to one of Chaplin’s best gags. Playing the rich drunkard socialite whose wife has threatened to leave him, Chaplin’s sophisticate is seen from behind, apparently sobbing over her photograph. His shoulders are convulsed such is the height of emotion he is feeling—at least, that’s what we’re led to believe, until he turns around and the movement is revealed not to be grief over a broken relationship at all but simply the motions involved in giving a cocktail shaker a thorough work out. It is an inspired moment, and the slightness of the rest of the piece can be forgiven as it gave us that gag.

For McCabe, this short was ‘pleasant but inconsequential’ but did contain some decent political or social content. McCabe goes on: ‘The Idle Class, slight though it is, is a winning film, a farcical Jekyll and Hyde conundrum whose title asks which is the idle class—the idle rich or the idle poor?’

In his private life, Charlie Chaplin’s recent troubles had come to an end with his November 1920 divorce from Mildred Harris. She received a settlement (or pay off, depending on your view) of $100,000 in cash, plus a share of some community assets the pair had between them. John McCabe offers a rather depressing account of Harris’ further fortunes—bankruptcy, a return to film such as in The Three Stooges’ short Movie Maniacs (1936), and two further marriages, one of which produced a son. According to McCabe, Marion Davies believed that Harris saw Chaplin as her ‘ticket to stardom’ and when that didn’t work out, she turned to alcohol that was to lead to her early death in 1944 of pneumonia following surgery.

Freed from Mildred Davis, Chaplin was able to turn his attention to other aspects of his life. He had blown hot and cold on his plan to bring his mentally-ailing mother Hannah Chaplin over to America; his previous commitment to do so had been walked back by Chaplin at the last minute. In the spring of 1921, during the making of The Idle Class, he finally decided to commit to rescuing his mother from her London convalescent home. He dispatched his aide Tom Harrington to ferry Hannah to America once all the required paperwork had been completed and permissions received. She came through New York, where the otherwise lucid woman mistook a immigration official for Jesus Christ, and she was (according to David Robinson) ‘settled in a bungalow with a pleasant garden near the sea’ with appropriate staff to look after her, all paid for by her rich and famous son. Her new proximity, however, didn’t make it any easier for Chaplin to spend much time with Hannah. Both seemed uncomfortable in the other’s company, as if they had little to connect them. Hannah, however, enjoyed regaling her caretakers and other visitors with tales of her life in British vaudeville.

It’s possible to think that during this period Chaplin was resolving some of his outstanding personal business, removing Mildred from his life and resolving the status of Hannah, but it is hard to argue that he was so organized or focused. Much of Chaplin’s personal and romantic life appeared during the 1920s to be chaotic. Chaplin picked his partners seemingly on a whim, unless it is to be assumed that he was simply waiting for Lita Grey to become slightly older, perhaps matching the image she projected in The Kid and in The Idle Class, in which she is a guest at the party. She would be his next conquest, and another tale of romantic woe for the world’s most famous comic.

Trivia: Chaplin became fond of the doubles motif; he’d previously used it in his shorts A Night in the Show and The Floorwalker. In other films, he had his Tramp infiltrate the upper classes by pretending to be one of them, as in shorts such as Caught in a Cabaret, A Jitney Elopement, and The Count. It perhaps was reflective of the fact that Chaplin himself had come from extreme poverty to extreme wealth in a short time, and (as the arrival of his mother in Los Angeles served to remind him) he no longer fitted easily in either world. The perfect use of this doubling, however, comes much later in 1940’s The Great Dictator in which he plays both the little Tramp (explicitly Jewish in this film) and buffoonish dictator Adenoid Hynkel. Of course, the Tramp takes the place of the dictator leading to the powerful (and still horribly relevant) speech at the film’s triumphant finale.

What the Critics Said: ‘Brevity is something else beside the soul of wit. It is sometimes a great relief and a rare treat. [This] is the case of Charles Chaplin’s latest contribution to the silent drama, The Idle Class. The story was written and the picture was directed by Charlie himself, and instead of going for a five-reel affair, he has returned to his first short love. But what there is of The Idle Class is so good and so funny that one realizes how much better is it to be entertained by two reels than bored in five. Charlie is too clever to prolong an idea unless it is really worth it, and his latest picture is just long enough. Charlie assumes two roles [in the film] since everybody is doing it. He is seen as an absent-minded husband and as a tramp, and it is difficult to say in which guise he is more winning.’—Helen Rockwell, The New York Telegraph, December 1921

‘We must admit our disappointment in Charlie Chaplin’s latest film effort, The Idle Class (First National), which, after all, turned out to be only a routine two-reel program farce. True, it is better than the average two-reeler since it has flashes of the Chaplin genius here and there, but, on the whole, it isn’t what we expect of the comedian these days. Charlie plays two roles: one an absent-minded man of wealth; the other, the typical Chaplinesque derelict. There are several humorous interludes, as a comic golf match and the complications ensuing when a man gets locked in a suit of armour. The real things of The Idle Class are the subtle shadings, given by Chaplin now and then, as the moment where the tattered adventurer sees the beautiful society girl pass him on horseback. The class tragedy of all the ages is caught in his eyes for just the fraction of a second.’—Motion Picture Classic, December 1921

‘[The] new Chaplin release [is] a characteristic bit of slapstick and irony called The Idle Class. It is only three reels, but they make up in rapidity what they lack in length. These years of eight-reel Chaplin pictures have spoiled his audiences. The Idle Class is a social satire which traces the adventures of a happy tramp and a blasé man about town. Charlie plays them both with such evident enjoyment that you feel he is not worrying about the moral. For undoubtedly he has a moral, though its exact point is lost in the rapid-fire action. At least he shows us that the life of the idler is not as simple as it looks, for his tramp is persecuted by cops and stray dogs, and the society chap is henpecked and harassed by the demands of fashion. In the end the tramp wins; at least he has the last word and casts the last stone.’—Picture Play, December 1921

Charlie Says: ‘Having rid myself of the burden of domestic and business affairs, I felt like I was stepping on air … now a free and unencumbered, wonderful life began again. I had work to do in California. I intended to hurry through my contract with First National, for I was anxious to get started with United Artists. … News came that Mother’s health had improved and now that the war had ended we could bring her safely to California. I sent Tom to England to accompany her on the boat trip over. … I had not seen her since I was last in England, a period of ten years, so I was somewhat shocked when a little old lady stepped off the train at Pasadena. … I still had four pictures to supply to First National. In a state of quite desperation, I wandered through the property room in the hope of finding an old prop that might give me an idea: remnants of old sets, a jail door, a piano, or a mangle. My eye caught a set of old golf clubs. That’s it! The Tramp plays golf—The Idle Class!’— Charlie Chaplin, My Autobiography, 1964