Story: The Tramp has to battle with his wife for a share of his pay from his labourer job, and ends with enough to fund a night of drinking…

Production: After the triumph of The Kid, the regulation shorts The Idle Class and Pay Day may have seemed to both Charlie Chaplin and his expectant audiences as a step backwards. They could easily have emerged from his Mutual or late Essanay periods, but they were from his point of view little more than a contractual obligation, films he owed to First National before he could break free and fulfil his obligation to his impatient partners in United Artists.

Chaplin’s double role as Tramp and rich man in The Idle Class may have been an indicator of the difficulty he was having reconciling himself to his new found wealth and fame. He had been making films for the better part of six years, with fame and its associated riches coming relatively early in that process (Chaplin once admitted: ‘There is nothing like money. It does make life so easy.’) Although money was no object, he still lived something of an itinerant life in hotels, rented houses, and often sleeping at his studio, especially during the period of his troubles with his first wife Mildred Harris. His newest film, Pay Day, was clearly a throwback to earlier times when things were simpler for Chaplin himself and simpler in his filmmaking too. Like his previous short, A Day’s Pleasure, it places the Tramp in an everyday situation, where he has a family (or, in Pay Day at least, a wife).

Production had begun on Pay Day in the summer of 1921, but it wouldn’t see release until the following spring. It started life under the title Come Seven, a film about rich plumbers—to be played by Chaplin and Mack Swain—who would travel to their jobs in a swanky chauffeur-driven limousine. A day or two into filming, Chaplin suddenly abandoned the film and made arrangements to go on a trip to Europe. Seeing him off at the station, Sydney Chaplin called out to Chaplin’s companion on the trip Carlyle Robinson, ‘For God’s sake, don’t let him get married!’ (Syd appears in Pay Day as the owner of the lunch cart.)

One of the attractions for Chaplin of the trip was the chance to attend the premiere of The Kid in London. Greeted by enthusiastic crowds everywhere he went, there is little doubt that the entire trip was little more than a grand distraction from filmmaking. Chaplin reconnected with old friends, relations, and acquaintances, as well as with the streets, sights, and sounds of his lamentable childhood. He was aged only 32, so it seems a little early for him to be overwhelmed with nostalgia, although distance through living in Hollywood may have been a factor, as could the arrival of his mother to live in California.

He went to Paris and Berlin (where he briefly met Pola Negri, who would recur in his life a little later), and met H. G. Wells. Chaplin returned to California in October, but did not immediately return to work. He wanted to go fishing in Catalina instead, but discovered the season was already over. Chaplin still owed First National two films (they had agreed to accept one two-reeler and one four-reel film to see out the contract). When he finally knuckled under and made Pay Day, he completed the half-hour film in less than 30 days—it was to be the final two-reeler he would ever make, and reportedly was one of his own personal favourites among his work. 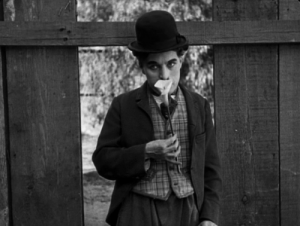 For once, Chaplin had a solid scenario to work from, so much so that he shot the studio-set second half of the film (dealing with his drunken night out and return home, recalling One A.M.) before the location-based opening sequence (that depicts him at work on the building site, building up to being paid). The opening material was shot in January 1922 on locations at La Brea (close to the Chaplin studio) and De Longpre where a new building was in the process of construction, so giving the film great production values at an economical cost. Trick photography (essentially filming then reversing the film) was used to achieve the Tramp’s uncanny facility with the bricks.

Simon Louvish in Chaplin: The Tramp’s Odyssey labels Pay Day ‘a workman like two-reeler’ and ‘a standard comedy formula’, and he’s not wrong. It is as workman-like as Chaplin’s Tramp is laying bricks, and with the harassing wife and desire to escape into drink, it certainly repeats an old Chaplin/music hall formula. It is, however, a more polished product than produced at any of his preceding studios, including Mutual. Chaplin knows how to put together an entertaining picture, all the elements in the right place at the right time. He could do this easily enough, but he aspired to do so much more. Louvish concludes Laurel and Hardy would better exploit the building site setting in later years in both The Finishing Touch (1928) and Busy Bodies (1933). Once again, he’s not wrong.

Although Pay Day recalls such shorts as Work and A Night Out, it is a more sophisticated film than either of those earlier examples, yet it contains within it more echoes of Chaplin’s origins in vaudeville and British music hall in that it falls back on some of those well-known tried-and-tested comedy staples. Pay Day, though, is of a far higher standard. It is only necessary to view the filmed-in-the-rain night scenes to note that Chaplin’s cameraman (essentially the cinematographer) had at least been developing his lighting techniques while Chaplin was off gallivanting around Europe.

Trivia: Pay Day was involved in a bizarre collision with modern day pop culture when one scene of the short was connected to one of the more prolific of the Internet’s many memes, the ‘distracted boyfriend’ image. The stock picture showing a man turning his back on his current girlfriend in favour of a passing stranger, the new option, has been adapted to all sorts of situations and became the most shared meme in 2017 and was declared ‘meme of the year’ in April 2018. The image from Pay Day shows Chaplin’s Tramp in a similar scene, as pointed out in June 2018 by filmmaker Peter Goldberg on Twitter. The Chaplin shot in which the Tramp turns his back on his wife to look at a passing woman was then itself quickly adapted as an internet meme, often commenting on the nature of internet memes themselves. Wonder what Chaplin would think of it all? At least it proves he is still relevant almost 100 years after the release of Pay Day.

Charlie Says: In the early 1920s Chaplin had taken up with New York-based bohemian intellectuals around Greenwich Village. Although of uneducated working class background, Chaplin began to adopt a more intellectual air, determined to be seen as more than just a movie clown. That led to some pretentious statements, such as: ‘Solitude is my only relief. The dream-world is then the great reality, the real world an illusion. I go to my library and live with the great abstract thinkers—Spinoza, Schopenhauer, Nietzsche and Walter Pater.’ He also expressed a desire to ‘retire to some Italian lake with my beloved violin, my Shelley and Keats, and live under an assumed name a life purely imaginative and intellectual.’

The Critics: ‘If we ever get to the point where Charlie Chaplin fails to make us laugh, we are going right out and order a nice, large, beautifully engraved tombstone. There will be nothing left in life for us. We would blame ourselves, not Charlie. Pay Day made even the ushers laugh in the theatre where we saw it. Ushers see a picture more times than anybody else, excepting the policemen. It had been running almost all week when we saw the ushers laugh. We can never hope to offer a critique as poignant as this. And Charles Spencer’s epitaph could not be more glorious than “He made even ushers chuckle.”’— Photoplay 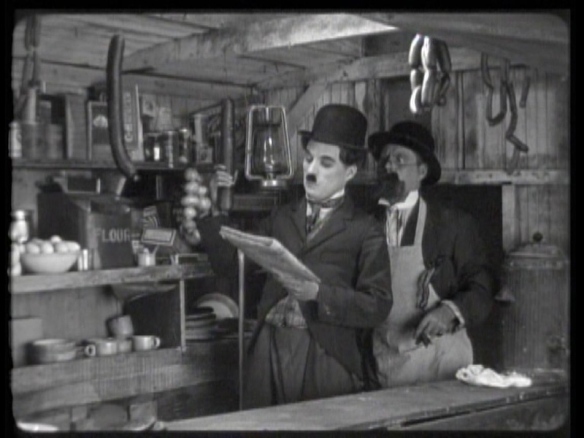 ‘A new Chaplin comedy, of course, is an event in the motion picture world, and all that the reviewer has to do is announce it. The rest may as well be silent so far as he is concerned, because nothing can be said about Chaplin that has not been said a dozen times already, and most people are not interested in what is said about him, anyhow. They just go to see him and laugh-and some—of them understand. It may not be entirely futile to report, however, that this new Chaplin comedy is one of his best. It is not to be ranked with The Kid, which was a longer and more penetratingly serious venture, and it has not the significance, perhaps, of Shoulder Arms, but it has enough pure fun, and sufficient satire, too, for anyone. With or without reference to anything else, it is something else; it is something to relish for its own sake. Underlying the picture’s surface buffoonery is that refreshing treatment of the commonplace by which Chaplin has so often exposed the irony of life. He shows the gods grinning at human earnestness, yet he does not join them in mocking it. He is part of humanity, but has the feelings and the aspirations of ordinary men; he is sympathetically one of the crowd. But he sees the fatuity of it all, too, and so is one above the crowd.’—The New York Times

Verdict: A perfectly serviceable if more polished take on a classic Chaplin scenario…