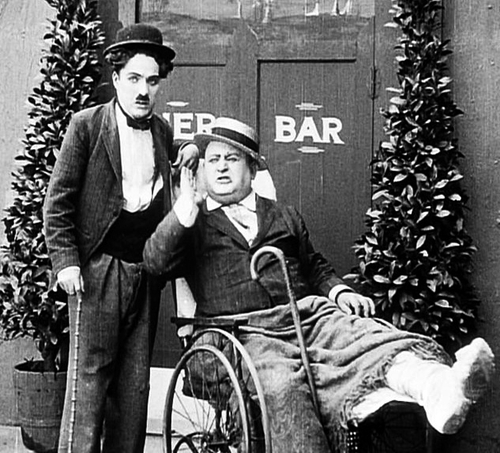 Story: The Tramp has a new job opportunity—looking after a man confined to a wheelchair…

Production: Another largely improvised Keystone quickie, His New Profession saw a return of the somewhat callous characterisation of the Tramp figure (as seen most recently in The Property Man) which Chaplin would slowly eliminate in favour of a character who could elicit audience sympathy more easily. While Roscoe ‘Fatty’ Arbuckle appears in a blink-and-you’ll-miss-him cameo as a barman in a brief pub scene, this short does showcase a soon-to-be rising star at Keystone (and later with Hal Roach), Charley Chase, playing the nephew.

It is Chase’s nephew character who hires Chaplin’s Tramp to look after his uncle (Jess Dandy), confined to a wheelchair due to gout, so he can spend time with his girlfriend. It is a simple set-up for a film that follows through on all the obvious, equally simple gags that the set-up suggests (and pre-figuring the later similar set-up of gout-victim Eric Campbell in Chaplin’s later short, The Cure, from 1917). Chaplin’s Tramp is less the committed to the new assignment, and is more intent on scraping together some change to feed his need for a drink. Having thus fortified himself, he returns to take charge of ‘uncle’, with his gout-stricken foot naturally hitting every possible obstacle. In the climax, the usual Keystone riot breaks out, as Chaplin’s Tramp flirts with Chase’s girlfriend and the inevitable cops arrive. His New Profession was the result of a day out in and around Venice and in Ocean Park on Venice Beach, later the site of an ill-fated nautical theme park.

Notable in the short is the Tramp’s interest in the National Police Gazette, consulted several times by the character, and a personal favourite of Chaplin’s. The notorious illustrated tabloid scandal sheet would re-appear in The Kid (1921) and pop up again in Limelight (1952), indicating Chaplin’s attraction to the title didn’t wane over time. He’s engrossed in his reading matter at the beginning of His New Profession, and later attempts to interest ‘uncle’ in its contents.

The Tramp’s beer fund comes from pinching the un-politically correct sign reading ‘Help a cripple’ he finds in front of a sleeping, begging unfortunate. Installing the sign in front of ‘uncle’ quickly brings in the coins he needs to fuel a trip to the Pier Bar where he can rest his weary feet, his toes having been bashed repeatedly while manoeuvring the wheelchair. While the Tramp is imbibing, the first ‘cripple’ awakes, reveals he’s not as ‘armless’ as his sign suggests and whacks the uncle for stealing his con. The Tramps return breaks up the fight, and secures himself additional cash for more booze later.

It is in the first few moments of His New Profession, however, that Chaplin displays his growing grasp of cinematic language. Clearly, the Tramp is the star character and the close up that opens this short takes its time to establish something about him. Not only is he reading the disreputable Police Gazette, he rips out the bathing beauty pin-up style front page and stuffs it into his pocket for later perusal. In a few moments of screen time, and without needing language, intertitles, or any over-emphatic ‘acting’, Chaplin immediately tells the audience all they need to know about the incorrigible character his Tramp is. His later activities over the fake ‘cripple’ see him redeemed after taking what appears to be callous action as the original beggar is equally revealed to be an active scam artist whose pitch has been invaded.

Essentially a throwaway piece of little consequence, His New Profession contributed to Chaplin’s growing profile. After a quiet July, he’d see four shorts released during August, thus increasing his visibility before an audience whom, it was becoming ever clearer, couldn’t get enough of the ‘little tramp’. As indicated in his autobiography, Chaplin was becoming ever more aware of his growing fame at around this time. ‘The stir and excitement at the announcement of [a] Keystone comedy,’ he noted of a visit to the cinema, ‘those joyful little screams that my first appearance evoked, even before I had done anything, were most gratifying. I was a great favourite with the audience. If I could just continue this way of life, I could be satisfied. With my bonus for directing, I was making two hundred dollars a week.’ Chaplin’s growing fame, however, would mean his days at Keystone (and his $200-a-week salary) would soon come to an end…

Slapstick: The grumpy and bad tempered uncle and the Tramp first meet when the wheel of the chair traps the Tramp’s foot, eliciting a swift jab to the uncle’s bandaged foot by the Tramp (the first of many, of course). Falling over on the pavement, the Tramp lands bum-first in some smashed eggs (twice). Entering the Pier Bar, the Tramp has his now traditional difficulty with the saloon’s swing doors, rapidly becoming trapped between them. The two wheelchair users get caught up in a fight where both wield their canes in a threatening fashion. Naturally, the uncle’s wheelchair almost runs off the end of the pier (twice!). When the nephew finds the Tramp chatting up his girl, he quickly dispatches him backwards over the bench. It then takes two cops to quell the rowing parties, one of whom ends up falling off the pier into the water (all viewers no doubt knew this would have to happen to someone: in other hands—such as Mack Sennett’s—he’d no doubt have had everyone in the drink by the end).

Verdict: A slight affair, but the opening and closing focus on the Tramp shows progress, 2/5