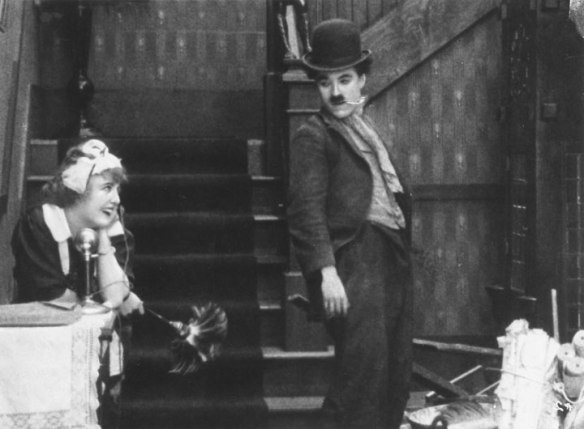 Story: The Tramp is gainfully employed as a decorator… unfortunately, decorating is not part of his limited skill set…

Production: Charlie Chaplin took his time to produce Work, his eighth short for Essanay. Since the beginning of 1915, when he’d joined the studio, Chaplin had been slowly asserting his artistic independence, first in moving back to California from Chicago and now in moving from Niles back to Los Angeles. The relocation to the studio housed in the Bradbury Mansion at 147 North Hill Street partly explains the gap between the release of the ‘quickie’ By The Sea on 29 April and Work on 21 June, but the larger part of the reason is that Chaplin simply took his time in developing his newest comedy short. This would increasingly become his approach to his work: developing, rehearsing and re-working material until he felt it was as funny as it could possibly be.

The Bradbury Mansion was not only the temporary creative base for Chaplin: the house also provided the exteriors for the home featured in the short, making it a historic record of an area now completely demolished. The magnificent turreted mansion was designed by Samuel and Joseph Carter Newsom, and built in 1886 at a cost of $80,000, complete with 35 rooms, five chimneys, and five turrets. The views of the city from the top of the uppermost turret were said to be spectacular. The following year the house was purchased by Lewis Leonard Bradbury for $125,000. Bradbury was a mining magnate with interests in Mexico which made him immensely wealthy. Various movie studios occupied the house from 1913 onwards, including J.A.C. Film Manufacturing Company, Hal Roach—who made the early Harold Lloyd shorts there—and others. Lloyd dubbed the building ‘pneumonia hall’ as it was impossible to heat and suffered from constant drafts. After Chaplin used it, the house became a restaurant for Supreme Court Judges and a rooming house for artists before finally being demolished in 1929 as the entire area was significantly redeveloped.

For Chaplin biographer David Robinson, in its ‘circumscribed form and ambitions’, Work was as original as D. W. Griffith’s Birth of a Nation (which Chaplin had obsessively re-watched) released four months earlier in 1915. Of course, in this tale of destructive decorators Chaplin was drawing upon his well-mined vaudeville heritage. He and half-brother Sydney had appeared in Wal Pink’s famous ‘Repairs’ sketch in 1906, as well as a Karno variation called ‘Spring Cleaning’, so he knew the source material well. In this filmed version, the Tramp and his boss are charged with the make-over of a respectable middle class home, offering many opportunities for slapstick havoc. Chaplin complicates this basic situation by including a hen-pecked husband, a wild wife, her clandestine lover and a semi-detached maid (played by Edna Purviance), who all variously get in the way.

Work builds upon the character development Chaplin had achieved in The Tramp. Here he’s not a vagabond as such, but gainfully employed, even if he wants to actually work as little as possible (and that’s where much of the comedy comes from). In his first appearance, Chaplin is shown pulling a cart which is not only laden down with decorating equipment, but also carries his boss, the decorator. Anticipating Soviet propaganda cinema, this image immediately encapsulates the relationship between capital (the boss) and labour (the Tramp). Forced to drag his boss (and his friend, who clambers aboard), the Tramp endures the Sisyphean task of getting the cart up a steep incline (in reality achieved rather cleverly by simply tipping the camera on its side).

Writing about this opening sequence, Chaplin biographer David Robinson noted: ‘Chaplin’s aims in inventing the sequence were no doubt uncomplicated enough: it is funny, and it prepares the audience to accept as his proper deserts the ill-treatment that the boss will later receive at Charlie’s hands. Yet, almost incidentally to his purposes, he has created a masterly and unforgettable image of the exploitation and humiliation of labour, the reverse of the Victorian ideal of salutary virtues of work.’

The mistrust between workers and their employers is reinforced by the ‘My silver!’ sequence, shortly after their arrival at the house, in which the lady of the house hides her valuables in a safe so the untrustworthy proletariat can’t get at them. The workers respond in kind by pooling their valuables—wallets, watches—and pining them in the Tramp’s voluminous pockets for safe-keeping.

Many of Chaplin’s later roles would see his character in some form of employment, rather than travelling the rails. In upcoming films he’s a policeman (of all things), a fireman, a waiter and (eventually) in The Kid (1921), a glazier (albeit a crooked one). The main thing is that the character constantly moves on from job to job, never settling on one ‘profession’ or way of earning a pittance. Here he’s an assistant decorator who can’t manage the basics of hanging wallpaper.

Chaplin biographer Joyce Milton saw in Work not a Socialist manifesto, but a comment on Chaplin’s more immediate problems with his own employer: ‘Work may well have owed something to Chaplin’s exposure to Socialist ideas, but the protest was also highly personal. He had hitched himself to the rickety cart of the Essanay Film Manufacturing Company, hauling its do-nothing partner, George Spoor, up the steep slope of profitability.’ It’s a over-stretched, over-burdened metaphor, but there may have been something in the idea.

Whether this commentary on his working conditions hit home, or it was just co-incidental, Chaplin did get to renegotiate his contract with Essanay in June 1915. The new deal—for a total of 10 more films before the end of the contract on 1 January 1916—started with Work. This suggested a new film would be required every three weeks, a rate of production Chaplin must’ve known he was unlikely to sustain, given his developing working habits. Each film would bring Chaplin an additional $10,000 bonus on top of his weekly salary, putting him on a par (bonus-wise, not in terms of salary) with Mary Pickford. The deal also involved the relocation of the Chaplin film unit to the Majestic Studios on Fairfax Avenue in Los Angeles, under Chaplin ally Jesse Robbins supervision.

Following the signing of the new contract, Chaplin embarked upon an even more ambitious feature film project to be called Life. Intended as no less than the portrait of a city’s slum life, it was clearly inspired by the work of D. W. Griffith, which Chaplin had taken to studying. He managed to shoot some flophouse footage before Essanay’s George Spoor ordered their star comic to stop work on that film and re-start production on more two-reel shorts immediately. Chaplin attempted to work some of the material into a later three-reel film called Police, but the footage was missing from the released version, which came out in 1916 after the comic had left the studio. Chaplin assumed the footage intended for Life must have been destroyed by Essanay. He was surprised, therefore, when it turned up two years later in an unauthorized Chaplin comedy released by Essanay called Triple Trouble in 1918. [There will be more on Police, Triple Trouble and the scenes from Life in two Essanay Extra Essays in the Chaplin: Film by Film 2015 eBook available in December]

To a lesser extent than in The Tramp, Chaplin maintains the newly-developed romantic (rather than plain lustful) side of the Tramp in his scenes in Work with Edna Purviance as the maid. They share an intimate moment, after much flirting throughout the action, in a close two-shot as he regales her with chatter while picking at his nails with a trowel and other decorating tools, a habit that clearly doesn’t endear him to her given her expression. He even covers her bare arms with his dirty hand prints. Romance is once more abandoned, as the maid returns to her duties and there is nothing left but for the melancholy Tramp to reluctantly go back to his work. The scene stands out amid the generally better organized knockabout farce of the rest of the short and indicates Chaplin’s growing interest in depicting interesting characters moments in a bit more depth.

John McCabe pointed out a recurring and developing aspect of Chaplin’s Tramp character. In opposition to both his boss and the lady of the house, the Tramp ‘remains imperturbable. This is a favourite Chaplin device: creating the tensions of anger around him while he stays placid in the eye of the storm. … Like any great actor, Chaplin listens to his fellow actors when they speak; he does not merely wait for his cue as so many actors do. He believes in the reality of Charlie; he plays Charlie on Charlie’s terms. … Charlie believes himself to be real and so he convinces us.’

Chaplin had often expressed his hope, mainly to half-brother Sydney, that he could make money quite quickly in films and then quit the picture business in short order. He had other interests he’d rather be pursuing professionally, especially music. The plethora of Tramp-inspired songs, such as ‘Those Charlie Chaplin Feet’ and ‘The Chaplin Strut’ served to irritate the would-be composer. His rage was partially assuaged by a public appearance in July 1915 at the Shrine Civic Auditorium in Los Angeles where he conducted the orchestra in their playing of one of his own original compositions. In future, he’d combine his musical ambitions and his film archive in a series of re-scored re-issues, but for the moment, the film business had a firm grip on Charlie Chaplin.

Trivia: During the making of Work, Chaplin injured his wrist, an accident that rapidly became exaggerated in the re-telling to the extent that it was rumoured he’d actually been killed engaged in a dangerous stunt: his almost two month absence from the screen no doubt reinforced this rumour.

The Contemporary View: Chaplin didn’t always score positive reviews, even for his better films. ‘Chaplin has found the public will stand for his picture comedy of the worst kind, and he is giving them the worst kind … [Work] is the usual Chaplin work of late, mussy, messy, and dirty.’—Sime Silverman, Variety, June 2015.

Slapstick: Following the cart sequence, the Tramp causes chaos at the household using every tool of the decorators trade to aid him. Entering the house, he is so burdened with assorted ladders, ropes, sheets, buckets and brushes, it is almost impossible to see him under it all. Everything is dumped on the floor of the hallway as he trips on the head of a bearskin rug. A plank proves to be a tricky prop in the Tramp’s hands—he also ends up as a support for the same plank as his boss sits on it, a role soon abandoned when Edna enters. After lighting the stove, the Tramp has his usual trouble with a swing door and takes his frustration out on the aforementioned bearskin rug. There’s much literal mucking about as the Tramp helps his boss out when a bucket of paint falls on his head (caused by the careless Tramp in the first place). The Tramp has clearly never hung wallpaper before (is this his first day on the job?). Leo White’s ‘French count’ arrives to cause more havoc, before a faulty stove brings the action to an explosive climax.

Verdict: Good slapstick structure and character stuff, but still lacking depth on the Tramp himself, 3/5

An 80,000 word ebook chronicle of Chaplin’s early films from Keystone (1914) and Essanay (1915), based on the blog postings at Chaplin: Film by Film with 20,000 words of supplemental biographical essays.