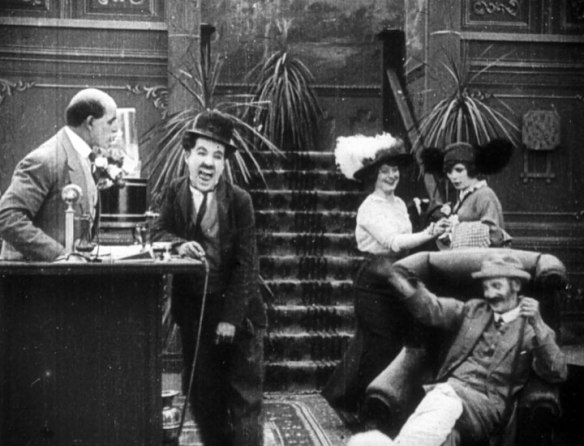 Story: The Tramp gets in trouble in pursuit of the ladies, leading to sleepwalking shenanigans and balcony baloney…

Production: Often considered to be Chaplin’s true debut as writer and director, as well as star, Caught in the Rain is a leap forward in quality of production. Gone is the usual slapstick-driven Keystone runaround. Instead, this short features a series of incidents that while played for comic effect actually relate to one another, and are partly driven by character not just plot. This would be the approach Chaplin would pursue in making his own films in future.

Caught in the Rain is the film that Chaplin singled out in his autobiography as being his debut as a creative behind the camera (despite his largely uncredited but important contributions to a couple of shorts before this one). ‘When I started directing my first picture, I was not as confident as I could be,’ admitted the comic in My Autobiography. ‘In fact, I had a slight attack of panic. After [producer Mack] Sennett saw the first day’s work, I was reassured. Caught in the Rain was not a world-beater, but it was funny and quite a success.’

Although Chaplin took a different approach to filmmaking than either Sennett or Mabel Normand, he was conservative enough for his first effort to rely on tried-and-tested material he knew he could perform. In creating the film he uses some of the ‘park comedy’ common to many Keystone films, and most recently seen in Twenty Minutes of Love, then a bar-room scene (straight out of his previous effort, Caught in a Cabaret; even the similarities in title are interesting), presented mainly as an excuse for Chaplin to redo his drunk act, which dated back to his vaudeville days. There’s a lovely touch as he appears to pull himself into the bar by his ear, thus overcoming his own resistance. It was a routine he knew he could pull off effortlessly, yet it would always, without fail, crack up an audience whether live in a theatre or in a cinema.

Even the final section recalls a recent Chaplin short: the hotel room mix-up sequences are straight out of the Normand-directed Mabel’s Strange Predicament, and even the Tramp’s ‘predicament’ here recalls that film. However, the interest comes in how Chaplin makes his Tramp, the character of the ‘little fellow’, the driving force for the story. Things happen to him, yes, but it is in how he reacts and attempts to get himself out of the evermore bizarre things that happen to him where the comedy genuinely lies. While Chaplin doesn’t quite resort to the Keystone-style chase-and-fight finale for Caught in the Rain, he does rely upon that old stand-by of the Keystone Cops to wrap things up.

Despite all these echoes of past work, Caught in the Rain is also a film that looks forward, not least to the following year’s A Night Out which revisits much of the material here in a more mature and controlled manner. From this film forward until the end of his Keystone contract at the end of the year, Chaplin would direct virtually every short he appeared in, only giving up the reins for three minor exceptions and the feature-length Tillie’s Punctured Romance which Mack Sennett handled.

There are other ways in which Caught in the Rain differs from the standard Keystone productions of this period. One of them is in the number of individual shots that make up the movie. Chaplin used here many more cuts than in most of the films he’d appeared in previously, applying all he had learned by studying the working methods of other directors. He’d spent the four months he’d been at Keystone figuring out how films were made and how he could improve upon the methods used. In Caught in the Rain, Chaplin shows an immediate grasp of how to construct a coherent story through editing, rather than through the pantomime acting featured so often in Keystone product.

While not appearing to be innovative or out-of-step with the other Keystone releases surrounding it, Chaplin’s first writer-director credit nonetheless proves to be the funniest film he’d appeared in so far, and by far the best-told story of the dozen or so films he’d made up to this point. He relies far less on the use of inter-titles to explain the story: it is so straight-forwardly told visually they are largely unnecessary, and by the frantic final stretch of the film they disappear completely.

In Mack Swain, Chaplin had found an ideal foil, and he would work with him again many years later in 1921 when he was under contract at First National, appearing in classics such as The Idle Class (1921), Pay Day (1922), and The Pilgrim (1923), as well as playing a larger role in 1925’s The Gold Rush. Alice Davenport returned from Mabel’s Strange Predicament for this film, and proved to be a good ‘straight woman’ to Chaplin’s comedy antics. The entire ‘wrong room’ sequence is a piece of true comic genius, yet there was so much better material yet to come from Chaplin over the next few years. The following scene, in which he’s undressing for the night, is probably the most ‘human’ we’ve seen Chaplin’s Tramp to be so far in the Keystone series. The dizzying pace of events that make up the climax must’ve had audiences rolling the aisles, even if the film doesn’t have a proper ending…

Slapstick: Swain’s irate husband is quick to knock down Chaplin’s Tramp when he’s caught chatting up his wife in the the park, while a near-miss with a speeding car put the Tramp down in the middle of the road. A man whose leg and foot are in plaster in the hotel foyer is an obvious target for some painful slapstick. An attempt by the drunken Tramp to tackle the stairs sees him fall back to Earth, face first, a situation repeated and multiplied when several other participants join him (this is actually a good, simple example of Chaplin mining an easy bit of business to the greatest comic effect, used again in The Floorwalker and One A.M., both 1916).

Verdict: Genuinely laugh-out-loud funny, even after all these years, Chaplin has found his true path at last, 3.5/5