Story: Following the progress of a US ‘doughboy’ from boot camp to the battlefields of France and beyond during the First World War.

Production: Charlie Chaplin came late to the First World War; so late, in fact, that the Armistice was declared just under a month after the release of his WWI movie Shoulder Arms. Although only 46 minutes, Shoulder Arms was too long to be classified as a short, so is often regarded as Chaplin’s first feature film.

Reluctant to engage with the war effort, Chaplin had finally given in to popular pressure and had done ‘his bit’ through his tour selling war bonds (see The Bond). Sending his Little Tramp figure onto the battlefield seemed like a good idea to Chaplin, and Shoulder Arms had started out as a project called Camouflage, which he’d put to one side in order to deliver his promised ‘propaganda’ film, The Bond.

Chaplin knew the dangers of playing the war for laughs—many of his friends and professional acquaintances had warned him off the putative project—so he approached Camouflage carefully. It would be the best expression to this point of his ability to balance humour and entertainment with tragedy and depth of feeling. Announced in the trade press as a five-reel presentation, the film was expected to run almost an hour long and was planned to depict the Tramp’s experiences before, during, and after the war. In the event, Chaplin chose to focus on only the middle section of the planned triptych, and other editing meant that the movie came in under the promised length. Nevertheless, at about 46 minutes, Shoulder Arms was Chaplin’s longest movie to that point. He was finally ready to put down the Tramp’s cane and instead pick up a rifle. 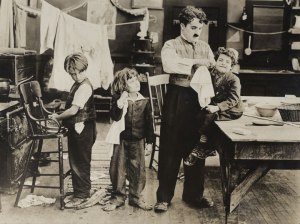 In filming Shoulder Arms, Chaplin followed his original, unusually detailed (for him) outline, by filming the scenes intended to convey the Tramp’s civilian life before he enters military service. He was to be depicted as a meek fellow, under the thumb of his dominating wife and the father of a brood of unruly children, played by a trio of child actors: True Boardman Jr., Frankie Lee, and Marion Feducha. The role of the wife was not filled as she was intended to be an off-screen presence, only indicated by the items she habitually threw at her husband. At one point, the Tramp leaves his trio of children outside a tavern as he seeks a blessed escape from his life. When he returns home to find the postman has delivered his draft papers, the Tramp is overjoyed, seeing the Army as an opportunity to escape his unhappy life.

There follows a sequence at a recruiting office which includes a medical examination (the doctor is Albert Austin) during which Chaplin draws upon some old vaudeville routines for his new farce, including scenes played entirely in silhouette. It took Chaplin the better part of a month to shoot all this material, but unhappy with the way the film was progressing he dropped it all from the film—that’s not surprising as the scenes are unusually laboured for Chaplin. Luckily, the footage survived and has been incorporated into the Unknown Chaplin (1983) television documentary series and as ‘deleted scenes’ on The Chaplin Revue DVD release. 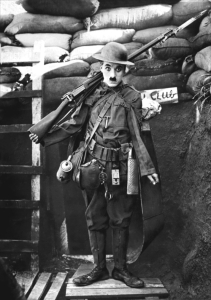 During July 1918, Chaplin devised a new story and had new sets built—this was all a costly process, as was the discarding of so much material, but it was a cost he was prepared to shoulder. The new sets were recreations of the trenches that the American and other Allied soldiers inhabited during the battles in France. For four weeks Chaplin shot on these sets, finding comedy material in the harshness of the conditions that the troops had to endure. The shooting of the sequences in which the Tramp disguises himself as a tree so as to penetrate enemy lines were shot at the height of an LA heat wave, making things ever more uncomfortable for the star-director.

It was all worth it, however, as audiences acclaimed the sequence as one of the funniest Chaplin had yet committed to film. The rural appearing environment in which these scenes apparently take place was filmed at Wilshire Boulevard and Sherman in Beverly Hills! By the time Chaplin had shot the scenes in which the soldier Tramp meets Edna Purviance’s French peasant in her wrecked home in mid-August, Chaplin realised he was running out of time to supply the propaganda film he’d promised the Liberty Bonds organisation (see The Bond). Production on Shoulder Arms was shut down so the cast and crew could spend a week filming on The Bond. 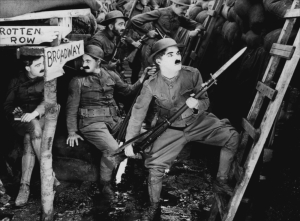 It would be the middle of September 1918 before Shoulder Arms would be completed, edited, and prepared for distribution. At that point, Chaplin was suddenly overwhelmed with doubts about both the quality of the film he’d made and the wisdom of releasing a film that dealt in a humorous way with the serious topic of the war. It was only when his war bonds tour partner Douglas Fairbanks watched Shoulder Arms and laughed from beginning to end that Chaplin’s confidence in the project was restored. It was timely intervention, as he’d been on the cusp of cancelling the release and would no doubt have destroyed all the footage he’d shot.

In the event, Chaplin needed to have no concerns; among the most prominent supporters of Shoulder Arms, those who seemed to enjoy the picture the most, were the troops returning to civilian life from the front. The film seemed to realistically capture their experience, and they were both amused and relieved to have survived it. The film turned out, as David Robinson put it, to be ‘one of the greatest successes of his career’. 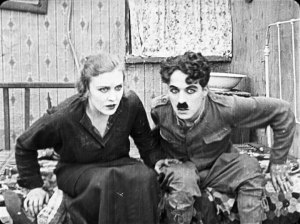 Towards the end of filming on Shoulder Arms, Mildred Harris had announced to Chaplin that she was pregnant (see The Bond). That resulted in a hasty marriage that coincided almost exactly with the release of the film. With a new wife, Chaplin leased a new home on DeMille Drive, but shortly after he had relocated there, Mildred told him she had been mistaken and she wasn’t pregnant after all. While this no doubt came as a relief to Chaplin, it effectively ruined the marriage as he now came to believe he had been trapped by a lie and that his matrimonial state was having a negative effect on his creativity.

Adding further to Chaplin’s upset was Mildred’s campaign to become a big name actress herself, no doubt through trading on the Chaplin name. Almost as soon as the ink was dry on the marriage certificate she had begun negotiating with Louis B. Mayer at MGM for a lucrative film contract. This tested Chaplin’s patience and resulted in a huge row between them. In his biography of Chaplin, Peter Ackroyd notes an article that Harris later wrote in which she admitted: ‘I think he [Chaplin] was right, but he ought to have had a little more patience and consideration of youth.’ Despite the fact that they were largely leading separate lives—Mildred had her own chauffeur and credit line at all the top stores, while Chaplin went to the studio early and came home late (if at all)—Mildred did somehow contrive to actually become pregnant by November 1918. The Armistice may have been declared and Shoulder Arms a bona fide success, but things were not about to become quiet on the home front chez Chaplin.

Trivia: Shoulder Arms signified a period of experimentation by Charlie Chaplin and an attempt to alter his signature Tramp figure. Fearing the Little Tramp had run its course, Chaplin attempted—through Shoulder Arms, A Day’s Pleasure, and Pay Day—to refresh his character by making him something of a family man. The deleted scenes from Shoulder Arms sees Chaplin’s Tramp-like figure looking after his three kids, while in A Day’s Pleasure, he is Tramp no longer but instead a happily settled family man. By the time of Pay Day, he’d dropped the idea of children but was still attempting to portray a figure other than his iconic Tramp. However hard he tried, it simply didn’t stick. By the time of The Gold Rush, in 1925, Chaplin had become resigned that moviegoers simply wanted to see him in a single guise and so the Tramp lived on for many more years. It would not be until Monsieur Verdoux in 1947 that Charlie Chaplin would successfully play an entirely different character.

Charlie Says: ‘Shoulder Arms was made in the middle of a sizzling heat wave. Working inside a camouflaged tree was anything but comfortable. I loathe working outside on location because of its distraction. One’s concentration and inspiration blow away with the wind. The picture took a long time to make and I was not satisfied with it. I was so discouraged I was thinking of throwing it in the ash-can. [Douglas Fairbanks] was my greatest audience. Shoulder Arms was a smash hit and a great favourite with the soldiers during the war, but again the film had taken longer than I had anticipated besides costing more than A Dog’s Life.’—Charles Chaplin, My Autobiography, 1964

Contemporary Reviews: ‘We double up painfully with guffaws of mirthfulness when he camouflages himself as a tree and battles the bewildered Germans, but underneath all the farce of it, we are in close sympathy with the little man and conscious of a touch of true pathos which makes us realize that this Chaplin who calls himself a comedian is perhaps the greatest (a word I dislike to use but which seems necessary in this case) actor on the screen today. Truly, with each release does he prove the value of his policy of making only a few pictures a year. With each successive Chaplin picture the verdict is, the best thing he has ever done, which, I believe, can be said of no other actor on the screen.’—Motion Picture, January 1919 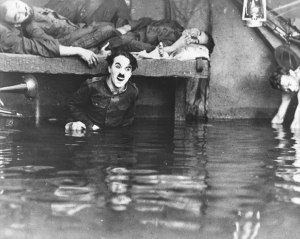 ‘Shoulder Arms is a perfect handling of a delicate subject, and in its treatment the comedian has shown, more completely than ever before, his faculty for getting inside a character and grasping, as if by intuition (but really by hard work) all that character’s salient points. The best thing about this film is that the rookie sees his own little weaknesses, his hardships, his hopes, his glories, his quaint vanities and small fears—he sees himself. Being completely funny on a background of completely terrible war is not only difficult, but dangerous. As far as we can see, Chaplin has been wholly successful.’—Photoplay, January 1919 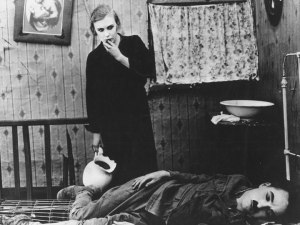 Verdict: The ‘it was all a dream’ ending may be a cop out, but Shoulder Arms is an exquisitely crafted film; the split-screen contrasting life in the trenches with the Tramp’s recollections of Broadway is genius, as is the sequence where he is disguised as a tree. Edna Purviance shines in this too, showing she could rise above her personal troubles with Chaplin and still act opposite him.